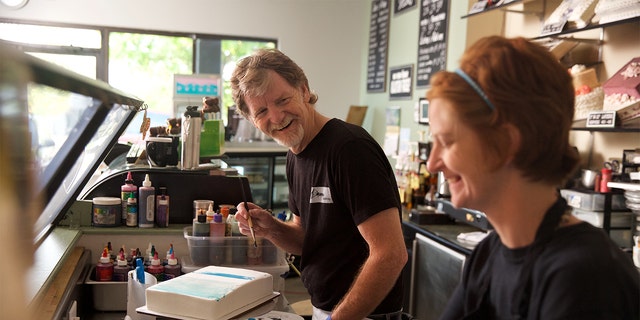 In the biggest case religious liberty case, the supreme court ruled 7-2 in favor of a Christian baker who unfairly got prosecuted because he refused to serve a same-sex couple because it violated his religious beliefs. This is outrageous, that people are prosecuted for practicing their religious beliefs.

There is no law saying that you can’t refuse to serve a same-sex couple, even the same-sex marriage law that says “states must license and recognize same-sex marriages.” This law too doesn’t have anything about discrimination, so these claims of “discrimination” are misleading. As you can see these cases are just about people’s feelings and not about the law.

This is an assault on people’s freedoms of free speech because courts, and the people who are being “discriminated against” are trying to silence the free practice of religion. These claims of “discrimination” are foolish and unconstitutional, these radicals are denouncing the U.S constitution.

These people don’t believe in freedom of religion and the constitution, Even now most of the general populous people agree with my statement. According to PRRI (Public Religion Research Institute) “In 2017, 56 percent of Americans were against the idea of small business owners declining to serve gay people due to religious convictions. This year, the number dropped to 49 percent.” If more and more people are increasingly sympathetic towards service refusal, then obviously It’s O.K to refuse to serve these same-sex couples.

We have to protect people’s religious liberty, we don’t want people to be prosecuted for exercising their religious beliefs and now people are realizing that it is a right to exercise religion. They also are realizing the fact that they don’t want people prosecuted because people are being “discriminated against”. So since the general populous acknowledge that it’s O.K to refuse to serve same-sex couples, then it is NOT an act of discrimination against gay people. People should know that it is O.K to refuse to serve and that it is a god-given right in our country they have and a right that all people in our country have.

3 thoughts on “It is O.K to Refuse to Serve Same-Sex Couples based on Religious Beliefs”