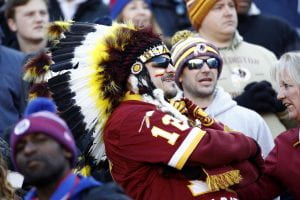 When you think of the names Redskins or Braves what do you think? Most people would think “They’re just names of sports teams.” But they’re not; Instead these names have a far deeper meaning behind them. The names were given to these teams to represent Native Americans; to honor them after the unacceptable treatment they recieved during the mid 1800’s. Yet people oppose the idea of honoring these tribes. The Redskins have been a football team since 1932. Originally in Boston, they were the Braves, then Washington, becoming the Redskins.

The Washington Redskins. They call it racist; afterall the people who call it may be racist for not accepting these names.

Everything seemed fine until the name was brought up over 80 years later.

The first actions to remove these names happened during the 2020 offseason. As racial injustice started seeing a rise in popularity this became the new topic. But, who wants these names gone? Afterall most people don’t see a problem.

A June 2014 poll by Rasmussen Reports, on the name Redskins found 60 percent agreed that the name should not change. This was a poll of over 5,000 people and the majority thought nothing of the name. If the majority of the people don’t find this name racist then who are the people who interpret it this way?

Why don’t we ask the Natives. Afterall the name is regarding them. But, even they don’t find anything about it wrong. While not specific to the Redskins, a survey conducted in 2002 by The Harris Poll for Sports Illustrated found that 81 percent of Native Americans who live outside traditional Indian reservations… did not find the names or images used by sports team to be discriminatory. How can people still say it’s racist when even the natives dont think it is?

Removing history, that’s all it is. It’s wrong and shouldn’t happen.

Another study from the Washington Post followed through on what Natives think. According to them, “About 90% of non-football fans Native Americans don’t find it offensive.”

This is why football fans and I are calling upon something to be done. We can’t just sit here and watch history disappear. Think about the fans and players; they’re the ones who remember the Redskins. Don’t take away our memories. The commissioner of the NFL (Roger Goodell) must lift the bans on Native American team names and attire by taking a poll/vote by team owners to overcome a decision of whether or not the names should be allowed. This is the only way to get the team we love back. Without this the sport would never be the same.

2 thoughts on “It Isn’t Racist-Bring The “Redskins” Back”