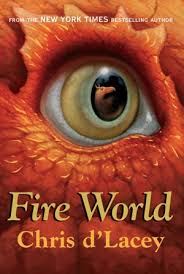 Recently, I just completed the last 300 pages of the 600-page fantasy novel Fire World. This novel was written by Chris D’Lacey, a British author who has received a  literary award for his contributions to fictional literature from the University of Leicester in England. He is a New York Times bestselling author and published Fire World in 2011 with Scholastic. Fire World is the second to last book in the Last Dragon Chronicles. Although it and the novel’s fellow books in the series haven’t won any awards, they are very well written and have definitely contributed to Chris D’Lacey earning his award. I read this book because it was the next book in the Last Dragon Chronicles  and I always have to finish any series of books that I start. Fire World is a part in a story of the Last Dragon Chronicles in which a lot of time has passed between this and the last, so it is an ideal place to jump into the series; although I recommend reading the past five books in order to understand the backstory.

Halfway through Fire World, Harlan Merriman has just caused a time quake and increase the time by eight years by investigating a quantum portal. Because of this disturbance, he is sentenced to the Dead Lands, separating him from his wife, Eliza, daughter, Penny, and son, David. So, Harlan wants to escape the Dead Lands to get back to his family, but he and his friend, brother Bernard, are all alone, so they find these men who are followers of the spirit Agawin (a part man, part angle, and part dragon spirit). Once Harlan Merriman finds out about Agawin he wants to discover more, but the temple of Agawin is at the top of the mountain, the tribe tells him, and the only way to reach it is by climbing the treacherous path all the way up to the top. So Dr. Merriman employs the help of a medic and the tribe leader so that he and brother Bernard can climb the hill. They find a precious relic hidden inside the temple, unfortunately, a firebird possessed by a Cluster of evil beings called the Ix found it as well. The Ix attack the tribe and speed off with the relic in had. Furious, Harlan wants to save his son from the Ix coming to attack the place where they live, Co:pern:ica, but the followers of Agawin have no way to get out of the dead Lands, so Harlan and the tribe concoct a plan to get out of the Dead Lands. Meanwhile, David Merriman, Harlan’s son, is trying to protect his family and the librarium (a huge library) he is taking care of, but the Ix and the Aunt Superiors, also called Aunt Gwyneth, attack the librarium, threatening the lives of all those within. Will Harlan reach Co:pern:ica and save his son or will the Ix and Aunt Gwyneth destroy the librarium? Read Fire World to find out!

I was surprised when three firebirds that stay with the characters throughout the story turn into dragons. Well, since firebirds mainly live in the librarium and are secluded and secretive, neither the characters or the reader knew they could do this. They turn into dragons on page 480 , when Aunt Gwyneth finds Penny on the higher floors of the librarium and tries to capture her so that she can use Penny and her mom, Eliza, to work the magic claw. The reader finds this out when Eliza whispers to Penny: “The claw won’t work without our auma (p. 478)” and warns her to do what Aunt Gwyneth wants. This proves why Penny and her mom are so important to Aunt Gwyneth. I was surprised that the firebirds appeared because Aunt Gwyneth is a sly person who will go to great lengths to not get caught. We know this from when Aunt Gwyneth disguises herself as a katt to infiltrate the librarium and only gives herself away when the characters notice “the katt let[ting] out a violent hiss as Aunt Gwyneth Forced the Cluster back into submission (p. 403). All the evidence Chris D’Lacey provides us with tells us that Aunt Gwyneth is sneaky and wouldn’t be caught that easily by normal firebirds. The firebirds also appear suddenly when Aunt Gwyneth “rolled Penny’s hair a little tighter in her fist.” and asks, “Where is the flying girl?” to which Penny replies;”Be-behind you, (p.480) Because the firebirds underwent a transformation that turned them into “dragonets… four time the size of a firebird (p. 480),” they would never have found Aunt Gwyneth by themselves, and that they appeared so suddenly, I am led to believe that the firebirds were aided in this transformation from the Higher, a group of beings the exact opposite of the Ix and work to do good. This is surprising because the Higher don’t take sides and because they are helping David and his family I think that the Higher will help them in their future endeavors. 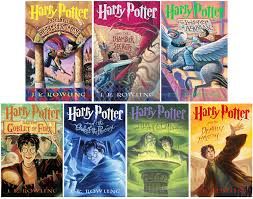 This book, and the other books in the series, remind me of the Harry Potter books by J.K. Rowling. One reason I think this way is that Fire World is similar to the Half-Blood Prince . This is because they are both second to last books in their respective series and the author makes it so that you can tell because they add suspense and foreshadowing to the book in excess. The Half-Blood Prince is the book that describes Harry and Dumbledore getting all the Horcruxes ( dark magical objects) destroyed before fighting Lord Voldemort. Fire World  is like this book because it still has its own problems, action, and character development, but it is really the book that gets the reader ready for the battle in the last book. In Harry Potter, the last book was the Deathly Hallows where Voldemort fights Harry Potter and in the Last Dragon Chronicles, the next book in Fire Ascending where David and the firebirds will fight against the Ix and Aunt Gwyneth  Another reason the at Fire World is like the books in the Harry Potter series is because both authors drop subtle hints and signposts to make the reader think if they want to figure out what an event meant. They want the reader to make inferences from their indirect evidence. For example, Chris D’Lacey includes the firebirds throughout the entire story and mentions them a lot about living within the librarium, as Rosa’s friends, and even the animal a Cluster of Ix possessed to steal the magic claw. Even though they seem like minor characters that won’t play a big part at the end of the book, the reader can tell that Chris D’Lacey intends them to be a major part of the books and confirms that when he actually shares the firebird’s point of view with the reader and have the help David and his friend, Rosa, make a discovery at the top the librarium.

Why did Aunt Gwyneth try to destroy part of the Is, the realm where the Higher live? When Aunt Gwyneth turns into a raven with the magic law and lies into the sky, Aurielle, on ofrh firebird dragonets, follows her into the sky. To evade her, Aunt Gwyneth flies into a bunch of clouds and “as she burst through the outer layers she emerged onto a bright white world that born no resemblance to any landscape she had ever seen before (p. 487)”” David is there in his bear form and attempts to talk sense into her by showing her possible futures to her. He says that “Only one of them leads to your [Aunt Gwyneth’s] survival (p. 489)” and that “the law is about to turn against you, Aunt. Give it up with grace and you may survive (p. 490)” She was faced with all the facts and even told by the Higher that any evil aggression would lead to her eventual demise, and still she tried to blast away the Is, flying her out of the clouds, through the air, and plummeting into the ocean below. The only way I can Aunt Gwyneth’s reasons for doing this is that she doesn’t believe. She even says to David and the Higher: “This is a trick… a clever projection, nothing more (p.491)” That proves to me that Aunt Gwyneth only cared about herself and refused to be outmatched by David and therefore couldn’t bring herself to see the truth. That is a good life lesson because there are always going to be people in life who act that way and won’t see truth, but you can’t let them bring you down.

I was interested by a passage in Fire World when a spirit girl named ANgle approaches the characters before the fighting to aide them. “Harlan stared at the girl in aw. It was the first time he’d see the mysterious flying child who Penny had not stopped talking about. She walked up and studied the burns on his eye. He held his breath as she reached out a hand and placed it over his thumping heart. Her blue eyes sparkled. ‘ Hugo is very happy,’ she said. And for the first time in his life, Harlan Merriman unleashed his emotions and cried. And as the tears rolled out of his damaged eye, so it healed and he could see clearly once more (p. 538)”

This passage was particularly fun to read because  the author uses their concise, effective sentences to display how amazing Angel is. If Harlan Merriman is a man that normally does not show his emotions and cries in the face of Angel, then that is the way the writer tells the reader that Angel will play an important role in the rest of the book. The author uses Contrast and Contradictions in the characters to highlight a certain point he is trying to make. This passage is also pretty mysterious and confusing as well Notice how Angel calls Harlan ‘Hugo’ even though that’s not his name. This shows foreshadowing that the name ‘Hugo’ has something to do with Harlan because Angel wouldn’t call him ‘ Hugo’ for no reason. This foreshadowing is really important because it gives us information for the next book. The reader can interpret this passage any way they want; that is the beauty of it. I chose to interpret this paragraph as telling us that the name ‘Hugo’ is going to appear during the Battle of Isenfier (an event that the fire birds told the  character would happen) and that David’s father, Harlan, will have something to do with it. That is why Fire World was such a great book to read, everything is up to the reader. There are so many passages like this that have really important meanings that go right over the reader’s head if they aren’t reading closely. For this reason, and many others, I rate Fire World an 8 out of 10 because of it’s great craft! I can’t wait to see the Battle of Isenfier play out in the last installment of the last Dragon Chronicles.