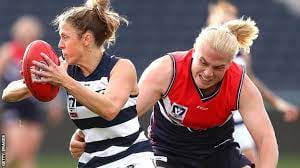 In the past year, women all around the world have been losing their competitive sports to transgender men. These men who chose to play in women’s sports are taking advantage of an unfair biological advantage that gives them more strength, stamina, and bone density.

In one instance back in 2014, transgender MMA fighter, Fallon Fox fractured her opponent’s skull in a fight. Fox was challenging women’s MMA opponent Tamikka Brents. Brents went on to report to Whoa Tv saying, “I’ve fought a lot of women and have never felt the strength that I felt in a fight as I did that night.” This is a prime example of the difference between men and women physically. This woman has been fighting her whole life and has never felt this amount of strength from a woman proving my point that men are stronger than women.

A Rasmussen Reports online survey. Surveyed That 51% of Americans do not permit transgender men to play in women’s sports while 29% of them do and another 20% don’t know. Do you want to know why 51% percent of Americans don’t want this to happen? According to (livescience.com), it’s because “men have an average of 26 lbs more skeletal muscle mass than women, women also exhibited 33%  less low body strength, and 40% less upper body strength than men.” Further showing that women are not as strong as men and that’s why the two different leagues were created in the first place.

Transgender social media groups are condemning speaking out against this issue as Transphobic making it harder for people to speak out about this prominent issue.

Some may argue that there are medicines that can suppress testosterone levels among men.

Well, how do we fix this issue you may ask? Well for starters we can speak out to the president who is releasing an executive order to allow this change according to whitehouse.gov. Or we could convince the supreme court to veto this decision because as presented before it’s just not a good idea.

In conclusion, we need to speak out about this issue before it is too late and women’s sports are taken over by men.