When I am at the zoo, observing all of the exotic animals through their cages, I always feel a sense of pity for them. Knowing they’ll be stuck in cages for the rest of their lives seems depressing, despite knowing their safety. This knowledge eases my pity, however I have learned that this is not the case with all zoos.

The Surabaya Zoo, located in Surabaya, Indonesia, is far from a safe haven for animals. Since its opening in 1918, the zoo has gotten quite popular among locals, however, its popularity is rightfully fading away.

The revolting mistreatment of the animals within its enclosures. There are many examples of how the zoo is incompetent and abusive to its animals. In 2013, Mali, a tiger at the zoo, became mysteriously ill; making her unusually scrawny. 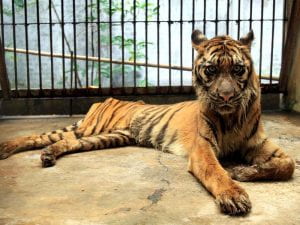 She was rescued from the torment of the zoo, although she died from this illness only a year later at age 15. Her age at death is highly unusual for a Sumatran Tiger, since they typically live to 20-25 years of age in captivity according to National Geographic. Investigations regarding her death, according to Smithsonian Magazine, showed she “became ill due to tainted meat”, implying that her food was poisoned. An identical case at the zoo occurred with a tiger named Rozek (13 years of age at the time of his death). People for the Ethical Treatment of Animals states “Rozek, a 13 year old Sumatran tiger, starved to death after his digestive tract rotted away from being fed meat laced with formaldehyde”, a chemical used to preserve dead bodies. Another horrific case that PETA identifies includes, “A giraffe named Kliwon died after swallowing nearly 20 kilograms of litter that had been thrown into his pen”. Green Matters claims the animals are “forced to live in dirty, litter-ridden, bare, cramped cages, all while suffering from malnutrition, neglect, and other kinds of mistreatment.” The same applies outside, as seen in pictures of a baby hippopotamus playing with garbage in its outdoor enclosure. 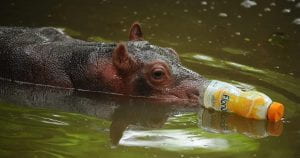 Past managers of the zoo were interviewed by PETA, admitting that “50 animals died within a 3 month period” of them working there. No matter how attached to the zoo or how ignorant people may be about this issue, these atrocious acts must be stopped as they are inhumane. Petitions are being released to close the zoo, and the issue has finally been presented to the President of Indonesia, Joko Widodo. Still, further support is needed so that all of the innocent animals, mistreated and abused at the hands of this zoo, can finally get the proper treatment they deserve for having to live a life without even freedom to guide their instincts.

1 thought on “The Death Zoo”