As an 8th grader in 2022, it is abundantly clear to me that my generation is not postracial. I witness racism at my small middle school. My brother notices it at his elementary school. We often see it online. In the moment, the hurtful words feel unforgivable. But I’ve realized that racism isn’t always a conscious action.

I grew up on popular shows like Bunk’d, Blue’s Clues, and Wild Kratts. What such shows have in common is the leading roles are made up mostly of white actors/characters. According to National Geographic, “80% of lead actors in movies are white, and 78% in scripted TV shows…” We’ve constantly been told that everyone is equal, regardless of their complexion, but that isn’t what we’ve observed on-screen. Clinical psychologist Alison Briscoe-Smith states, “Much like adults, what children see [on screens] is what they believe the world really is.” We notice those with lighter skin are, “…on the upside of power…” while those with darker skin are, “…on the downside of power.” Kids are influenced by what they view around them. If racial inequalities are perceived at a young age, futures will be impacted. 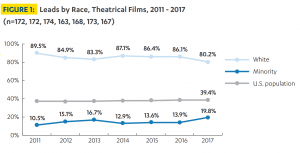 Dr. Ashtauna Anderson – who studies racism and its effects on kids – states, “By ages 2 to 4, children can internalize racial bias.” Children that young aren’t even in Kindergarten. At this age, many kids are learning basic manners from their parents. Conversations about race need to be on the list.

According to the 2019 Identity Matters report conducted by Sesame Workshop, of the 6070 involved parents, only 10% have conversations about race at home. And schools aren’t much better. Of the 1046 educators involved, only 27% say leadership at schools encourage conversations concerning race. This needs to change.

But why should parents and teachers take on this responsibility? Kids learn a lot from their caregivers. Parents are often the first role models. It’s up to them to set a positive example for their children early on. However, kids spend about 6.5 hours in school a day, 180 days a year. Teachers play a significant role in our lives, too.

To start these conversations, a New York Times article – Talking to Kids About Racism – suggests parents and teachers “…allow for questions even when you don’t know the answers.” It also suggests to “Have diverse books around for children to read.” Allowing children to be curious and surrounded by diversity will help them in having positive outlooks on race. Parents should take these small steps with their toddlers. Administrators should encourage teachers to work with parents to converse about race with kids starting in Kindergarten.

My generation is heading towards a more just future. But getting there starts with you.