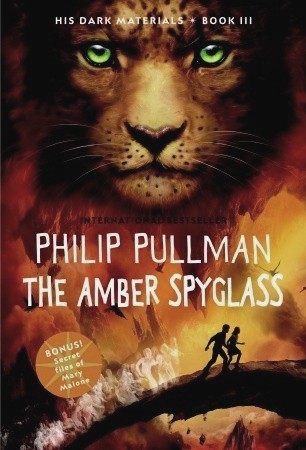 This trimester, I read the book The Amber Spyglass, a 518-page fantasy book by Philip Pullman. Philip Pullman lives in Oxford England and has won many awards, such as the Carnegie Medal for his book, The Golden Compass, Parent’s Choice Gold Award for The Subtle Knife, and the Costa Book of the Year Award for this book, The Amber Spyglass. He also received the Astrid Lindgren Memorial Award for all the work he contributed to the world of literacy.

Along with the Costa Book of the Year Award, The Amber Spyglass has received a Booker Prize long-list nomination, Parent’s Choice Gold Award, and a Newsweek Top 100 Book of All Time. Overall, The Amber Spyglass and the previous two books in the His Dark Materials series, The Golden Compass (Book One) and The Subtle Knife (Book Two), have contributed immensely to children’s literacy and my bookshelves. Since The Amber Spyglass was the third book in the His Dark Materials book series, I had to read it. “The longed-for third volume in this trilogy satisfies deeply…” Kirkus Reviews states on the first page of the novel. I loved the series so much and it was a MUST to read the concluding book to the series.

In the novel, The Amber Spyglass, the main characters, Lyra and Will, want to rescue Lyra’s friend, Roger, from the Land of the Dead, but they are being followed by two Gallivespian spies who won’t let them leave. Gallivespians are little people that are no more than a foot tall, which make them excellent hiders. They ride vibrant dragonflies, the color of which signifies the clan they belong to. The spies, Chevalier Tialys and Lady Salmakia, work for Lord Asriel, Lyra’s father, and will not let the children go anywhere but to Lord Asriel’s fortress. In order to make the spies let Lyra and Will into the Land of the Dead, Will threatens them with the Subtle Knife. The Subtle Knife has one side that can cut through anything and another that can rip holes between universes, making portals anybody can travel through. After making the Gallivespians obey them and cutting through to the Land of the Dead, Lyra and Will are led to a waiting area for those still living; They can’t leave until they die. The others living there tell them that only a Death can lead you to the gates that hold the dead within them. “See, everyone has a death. It goes everywhere with ‘em, all their life long, right close by (page 260).” a man there, named Peter, tells them. Because Lyra’s Death hides from her, she needs to embrace death in order to see it. When the Chevalier Tialys tells Lyra that he won’t let them go further, Lyra responds by saying that she has to see Roger and say goodbye and if she has to die in order to do that, that she wouldn’t care. Lyra accepted the thought of death and therefore found her Death, who appears to her shortly after. Lyra’s Death guides them to the entrance to the place where all the ghosts, including Roger will be. “I can show you the way in, but as for getting out again, you’’ll have to manage by yourself (page 268),” it says, leaving them to find Roger among the billions who have died. Will Lyra find Roger and escape with Will, or will they be stuck in the Land of the Dead forever? Read The Amber Spyglass to find out!

I noticed how the author used a lot of description, inner thought, and dialogue to provoke thoughts and questions from the reader. One instance where this happens is on page 278 through 279. Lyra, Will, Tialys, and Salmakia came across a seemingly injured toad, limp-hopping along a path. “It would be merciful to kill it,” says the Chevalier. “How do you know? It might still like being alive, in spite of everything. (page 279)” Lyra responds. At this point, the reader is faced with many questions. I was asking myself ‘What will the characters do?’, ‘Is the frog really suffering’, ‘What would I do?’, and much more. Another example of author’s craft eliciting questions from the reader is when Lyra and Will are trying to figure out how to escape the Land of the Dead. Will tries to use the knife to cut through to a different universe, but they are met with dirt and stone because the Land of the Dead is below any other universe with the living in it. My first question was: ‘Will they cut through the rock?’ but was soon answered a paragraph when Will says: “We’re going to have to make somewhere else before I can find a world we can open into. (page 312)” This brought on another set of questions from me like, ‘Where will they go?’, ‘How will they get there?’, ‘Will they bring all the ghosts with them’, and finally ‘What will happen if they’re stuck in the Land of the Dead forever?’ Making you have your own questions and inner thought is just one of the tactics Philip Pullman uses to keep the reader engaged whilst reading.

The genre of this book is definitely fantasy, but has some elements of science fiction. First of all, the multi-universe theory shown in the book is NOT fantasy. It might be possible that other universes exist besides this one. Throughout the series, Philip Pullman provides proof of how this could be scientifically possible. An article called Other Worlds by the Guardian was written about it. In The Subtle Knife, a character explains to Will that when faced with a choice or possibility, all of the possible decisions exist (or have the ability to exist), but as soon as you make the choice, all other possibilities vanish. They also state that a million other universes spring into being where a different choice was made. Another universe could exist where reptiles chose to evolve with wings instead of legs; or where Britain won the Revolutionary War; or where electricity was never invented. The Subtle Knife is fantasy, though. Scientists have yet to figure out a way to travel between universes, the Subtle Knife that Will wields in books two and three is completely unrealistic. Second of all, a mysterious elementary particle called Dust plagues scientists in the story throughout the series. I won’t give away the fun of reading books one and two to discover more about it, but during the series a certain scientist named Mary Malone figure out, with the help of Lyra, that Dust is actually conscious “shadow matter… (page 368)” and can respond to prompts. Now this might be fantasy, but reading the books and seeing all the “evidence” that exists in Lyra’s world, Dust doesn’t seem entirely like fantasy. In fact ,Dust seemed to be an incredibly theological symbol of divinity and God itself. This interesting mix of genres makes for an excellent read that enthralls the reader and makes you read on the edge of you seat, desperate to know more. To see Philip Pullman’s view on Dust, watch this interview here: https://m.youtube.com/watch?feature=youtu.be&v=5N6vzZuPy1s.

I’d compare Philip Pullman to J.K. Rowling because I feel like they structure their book series the same way. J.K. Rowling is the author of the famous Harry Potter series. If you haven’t read them, you’re really missing out and I highly recommend the series. It follows a boy named Harry Potter who, just like Lyra, lives in his own little world until he finds out that he’s a special part of something bigger. Both authors deliver this epiphany rather similarly. In The Golden Compass Lyra lives at Jordan College and only cares about what adventures he has next. Then her parents show her the north and she gets swept up into a witch’s prophecy and a magical journey. In Harry Potter and the Sorcerer’s Stone, Harry lives with his aunt and uncle until he is told by a half-giant named Hagrid that he’s actually a famous wizard. We also figure out later in the series that Harry is also in a prophecy. But the biggest similarity between these two authors is their last book. In Harry Potter and the Deathly Hallows, Harry figures out that the wizarding world is much bigger than he thinks and that in order to defeat Lord Voldemort he needs to destroy Horcruxes, objects that hold Lord Voldemort’s soul inside of them. In the last book to the His Dark Materials trilogy, Philip Pullman introduces us to the Land of the Dead and even God, known as the Authority, in the books. Just like J.K. Rowling, he makes the characters, as well as the reader, shocked at how big this imaginary universe is. Along the way, both show their characters’ willingness to sacrifice themselves for others and tackle the question ‘Where do you go when you die?’, Philip Pullman even goes so far as to tell us what happens when you escape that place, when a ghost tells Lyra: “We won’t go unless we know what’ll happen to us! (page 319)”

Finally, I was interested in this passage, when an old woman’s death tells Lyra and Will how to get to the place where all the dead go. Philip Pullman writes: “Then came a voice that hadn’t spoken before. From the depths of the bedclothes in the corner came a dry-cracked-nasal tone — not a woman’s voice — not a living voice: it was the voice of the grandmother’s death. ‘The only way you’ll cross the lake and go to the land of the dead,’ he said, and he was leaning up on his elbow, pointing with a skinny finger at Lyra, ‘is with your own deaths. You must call up your own deaths. I have heard of people like you, who keep their deaths at bay. You don’t like them, and out of courtesy they stay out of sight. But they’re not far off. Whenever you turn your head, you deaths dodge behind you. Wherever you look, they hide. They can hide in a teacup. Or in a dewdrop. Or in a breath of wind. Not like me and old Magda here… We live together in kindness and friendship. That’s the answer, that’s it, that’s what you’ve got to do, say welcome, make friends, be kind, invite your deaths to come close to you, and see what you can get them to agree to. (page 263-264)”

What I like about this passage is how it explains more about deaths and how they work, furthering the reader’s understanding, and gives the character a goal, furthering the plot, all the while maintaining an expertly crafted piece of dialogue that develops the character of the old woman, Magda’s, death. This way, Philip Pullman can knock out three birds with one stone, instead of devoting one paragraph to all three items. By effectively writing a paragraph that can exhibit multiple forms of literary strategies, he can move the story along more quickly and retain the reader’s attention. I really enjoyed this style, which Pullman maintained throughout the entire trilogy, making The Amber Spyglass a 9 out of 10, for excellent craft, detailed plot, and amazing author’s voice!

4 thoughts on “Letter Essay #6 – The Amber Spyglass: by Jalen Johnson”