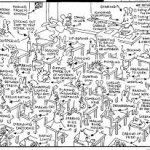 Envision the most disruptive student you know (if you are that person, I’m happy you are reading this). Now, envision a class of 30 students (Period 7: that is 11 more than our current situation). Now, populate that class of 30 with 25 versions of the Most Disruptive Student You Know. That is a bit like some of the classes I had in my old school.

Of course, in a situation like that, the teacher spends most of the time managing the class, and it’s very difficult to acknowledge the few students who are doing what they should be doing. That is how the MVP came about. Every two weeks, I’d acknowledge the few who were doing the right thing more often than their peers, not only because I thought that was the right thing to do but also in the hope that it may encourage better behavior. (The MVP also got special privileges, like running the bi-monthly raffle and sitting in large, comfortable beanbag chairs.) For the most part, it worked. Then I came here.

I wasn’t sure, moving from school districts from one end of the socio-economic spectrum to the other, whether to continue the MVP. Even in a DRG A district such as Easton, I thought, acknowledging the students who really provide value to a class could not hurt. But, then again, prior to coming to Easton, I never could have imagined having a class nearly full of MVPs.

That is basically the case with my Period 3 ILA class. I stopped naming an MVP weeks ago because I really couldn’t decide amongst students because so many were providing equal value to the class in terms of their effort, participation and behavior. This was equally true with my one eighth-grade class (most of whom are better readers and writers than even the very best student I ever had in my previous district), and, to a lesser degree, with my other classes.

So, the reason I haven’t named an MVP in a while is for those reasons: it’s basically impossible to choose one student over the others in two classes, and only slightly easier in my others. So, to my students, especially those in my Period 3 class, whose picture does not adorn the top of the white board and you think that perhaps it should, thank you for being great students the entire year. And, Hailey: this should answer your question, so you can stop asking me now.